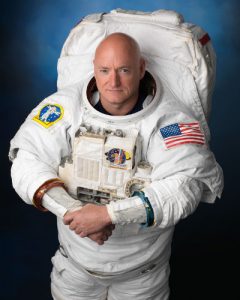 The WateReuse Association announced that U.S. Astronaut, Captain Scott Kelly will deliver the keynote address for the 33rd Annual WateReuse Symposium, September 9-12, 2018, in Austin, Texas. From U.S. Navy fighter pilot to record-holding astronaut, Captain Scott Kelly will draw from his experiences to deliver unparalleled life lessons, fascinating stories, and candid commentary on his epic journey—all sure to provide Symposium participants with a new appreciation for time, space and water.

The Annual WateReuse Symposium is the nation’s premier conference on water reuse and the only national conference dedicated solely to advancing the policy, technology, innovation and public acceptance of recycled water.

“Water is heavy and expensive to transport from Earth so it is continually recycled in space—including one’s own body fluids,” said WateReuse Association Executive Director Patricia Sinicropi. “Captain Kelly’s year long journey demonstrates that it is the quality of the water that we drink that is important, not the history of the water. We are thrilled that Captain Kelly is joining the water recycling community for this year’s WateReuse Symposium!”

Captain Scott Kelly captivated the world and seized the imagination of millions during his record-breaking voyage—proving that the sky is not the limit when it comes to the potential of the human spirit. On his trip, Scott, together with his identical twin brother Mark on Earth, paved the way for the future of space travel and exploration as the subjects of an unprecedented NASA study on how space affects the human body.

Captain Scott Kelly’s keynote address about his awe-inspiring stories from space and personal reflections on leadership, teamwork and testing limits will set the stage for a comprehensive technical program that showcases the latest success stories in water recycling, shares exciting new ways in which communities and industries are adopting water reuse strategies, and discusses emerging innovations that will drive greater implementation and acceptance of water reuse in coming years.

The Project WET Foundation and the WateReuse Association announce the release of a new Water Reuse booklet that introduces students...

The U.S. Environmental Protection Agency (EPA) is showcasing the successes of several WateReuse Association members in recruiting and retaining a...

The WateReuse Association applauds the appointment of Radhika Fox as Principal Deputy Assistant Administrator for the U.S. Environmental Protection Agency’s...