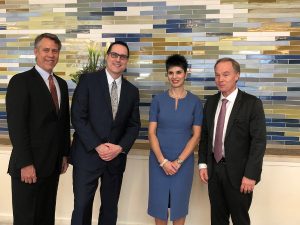 WateReuse is looking forward to working with EPA on national action plan on water reuse! Paul Jones of Eastern Municipal Water District, Eric Gernath of Suez North America, Pat Sinicropi of WateReuse, and David Ross of the US EPA were on hand for the announcement.

The U.S. Environmental Protection Agency (EPA) announced the development of a Water Reuse Action Plan at a February 27 water reuse workshop in San Francisco. The plan will leverage the expertise of both industry and government to ensure the effective use of the nation’s water resources. WateReuse President Paul Jones, General Manager of the Eastern Municipal Water District, and WateReuse Executive Director Patricia Sinicropi were on hand for the announcement and participated in the workshop sponsored by Suez Water Technologies and Solutions. A draft of the plan is scheduled for release and public review in September at the 34th Annual WateReuse Symposium in San Diego.

“The Nation’s water resources are the lifeblood of our communities, and the federal government has the responsibility to ensure all Americans have access to reliable sources of clean and safe water,” said David Ross, U.S. EPA’s Assistant Administrator for Water. “There is innovative work happening across the water sector to advance water reuse, and the EPA wants to accelerate that work through coordinated federal leadership.”

The Water Reuse Action Plan will seek to foster water reuse as an important component of integrated water resource management. EPA will facilitate discussions among federal, state, and water sector stakeholders and form new partnerships to develop and deploy the plan.

EPA’s actions are part of a larger effort by the Administration to better coordinate and focus taxpayer resources on some of the nation’s most challenging water resource concerns, including ensuring water availability and mitigating the risks posed by droughts. This includes working closely with the U.S. Department of the Interior, the U.S. Department of Agriculture, and other federal partners to collaboratively address western water supply and other resource management challenges.

“The Department of the Interior is excited about forging this partnership with EPA so that we can leverage each other’s success and move forward on one path,” said Tim Petty, Assistant Secretary for Water and Science at DOI. “Communities across the country are facing water shortages, and it is the role of the federal government to ensure that all have reliable access to the water needed to protect human health and maintain our robust economy.”

EPA has previously supported water reuse efforts, including development of the 2017 Potable Reuse Compendium and Guidelines for Water Reuse, but the Water Reuse Action Plan is the first initiative of this magnitude that is coordinated across the water sector. Ongoing efforts by other federal agencies, such as the U.S. Department of Energy’s Grand Water Security Challenge, and by various non-governmental organizations dedicated to water resources management, will be coordinated and leveraged as part of the overarching strategy to advance water reuse.

For more information, including opportunities to engage with EPA on this effort, visit www.epa.gov/waterreuse/water-reuse-action-plan.

On Wednesday, July 1, the U.S. House of Representatives passed the Moving Forward Act (H.R. 2), which authorizes more than $1.5 trillion...

Corporate Climate Goals: How to Implement a Water Sustainability Program

It’s often said that accounting is the language of business. Climate risk is forcing many companies to become bilingual. That...